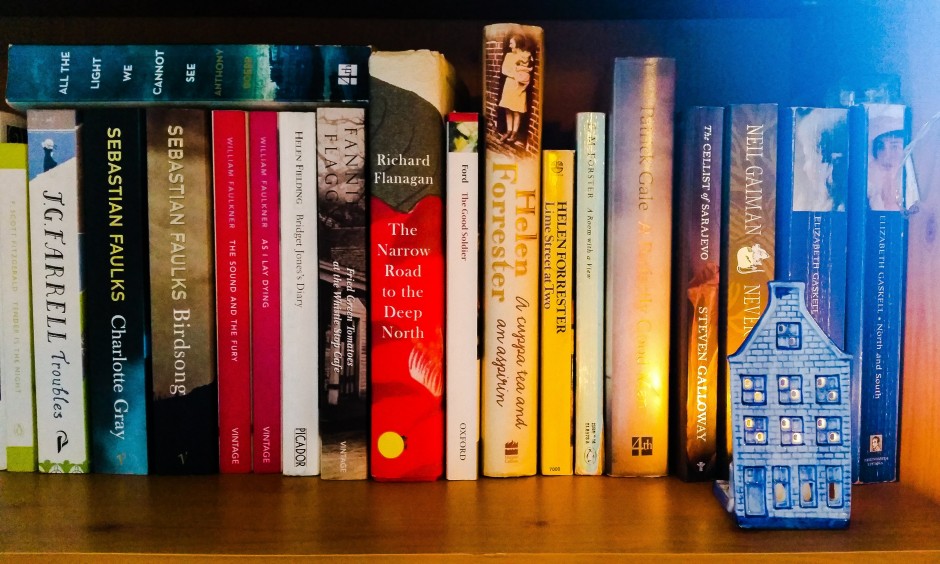 September was an odd, emotional month with a family funeral, a spectacular wedding and some long overdue quality time with friends and family. As for reading, a little geography, a little history, a little close to home.

Prisoners of Geography by Tim Marshall

With geopolitics prevalent in practically every news headline in recent months it felt like the right time to pick this one up and while it was useful to grasp some of the more prickly issues of global politics, there wasn’t quite as much social history as I might have expected from such a book. For me, politics always has to come back to people and the real-life impact of decisions made by those in power. It’s why I always preferred history to geography in school.

But, that said I did get a lot from this book. The geopolitics of Africa, for example, or the internal conflicts of China were entirely new learning for me. We learn so much about our own circle of history or those which overlap ours, that you might not realise how much we don’t know about those beyond our own experience. Western Europe, America, the Middle East – these are histories and current affairs that feel real, familiar, but my knowledge beyond that has been very sheltered, perhaps it was even blissful ignorance.

Feeling a little more familiar now, with the geopolitics of the wider world has done nothing to calm my Brexit fears, for example. But in another way, there’s also a comfort to be had in the realities of geopolitics. In an increasingly digital world where the threat of chemical and cyber attacks outweigh the traditional warfares, it’s good to be reminded that somethings will still be determined by geography – mountain ranges, oceans and cold water harbours:

“As for twenty-first century progresses, the geographical factors that have helped determine our history will mostly determine our future.”

The Heart of a Woman by Maya Angelou

I’ve been making my way through Maya Angelou’s autobiographical series at a rate of maybe one book a year, picking them up in charity shops as and when I come across them. The Heart of a Woman, the fourth volume, was a welcome find in a local bookshop, News from Nowhere, earlier this year and after my focus on non-fiction, I was relieved to ease back into literary fiction with the beautifully written autobiography of one of my favourite writers.

There was as much history in Angelou’s book as there was in Tim Marshall’s, giving more of the social history I was craving. Civil rights era New York, 1960s Cairo, the still heavy shackles of the patriarchy, even for a revolutionary and feminist such as Angelou. She writes honestly of those brave acts of revolution in the same breath that confesses fear of walking through a hotel lobby full of white men.

“‘You took a job without consulting me? Are you a man?’

He stood and began to pace over the expensive rug. His tirade carried him from the sofa to the entry, over to the large chair and back to stand in front of me. His vilification included my insolence, independence, lack of respect, arrogance, ignorance, defiance, callousness, cheekiness and lack of breeding. I sat, watching him, listening and thinking. He was right. Somewhere in his swarm of words he had my apt description. I also understood that maybe I had gone too far.”

Her conflicting relationship with Vus – a democratic idol of her political hopes and dreams, yet a sovereign ruler at home – is difficult to balance with the Phenomenal Woman history knows Maya Angelou to be. But that’s the beauty of her autobiographical volumes, Angelou does not claim to have been born into the world a Phenomenal Woman, but like all, to have been built up by it, by the experiences and struggles of the real world. Angelou’s experiences may be extreme compared to ours but they are testimony to the incredible time of change and progress which she lived through.

Booking a last minute flight, throwing things in a bag, this is the reality of living away from home when the dreaded call comes. In my morning rush to get to the airport I picked a book off the shelf to read on the plane, anything would do. Grace Notes, I’d begun reading it before I think, it felt vaguely familiar, but much more so than I could have imagined. Travelling home for the funeral of her father, Catherine was going through the same motions as I was – the flight to Belfast, the wake, the funeral – a pattern of behaviour, a ritual so well worn, yet never any easier. It was odd for art to imitate life quite so closely but thankfully our paths diverged and as I prepared myself for the wedding of two good friends, Catherine’s story took her back to Scotland, to the fine balancing act of trying to raise her baby daughter single-handedly and trying to create something of meaning and purpose at the keys of her piano.

The descriptions of Catherine’s creative impulses are beautiful as are the moments between mother and daughter. There is a scene on a beach which is so full of light and life, which oddly again I read following a visit to one of my favourite beaches in Donegal, Kinnego Bay. This wild scene basked in sunlight, stands so starkly against the dark shadows of the flat above the pub, the damp cottage on the island, even the dark basement in the city.

The story jumps back and forth between the small town in Northern Ireland, Glasgow, Kiev, moments in her life that culminate in her greatest moment:

“There was a moment’s silence which was broken by a man’s voice shouting. Then the hall was full of applause. Bravo. Catherine stared at her knees. Her nerves returned. She wondered if her legs would shake visibly if she stood up. Would her legs bear her weight? Still the applause went on.”

One thought on “September Reads”

This site uses Akismet to reduce spam. Learn how your comment data is processed.